Nothing Short Of Extraordinary – Get To Know The Weird and Wonderful Work Of Frank McFadden.

The work of artist Frank McFadden’s is eccentric.. it’s a freakish , comical and completely fascinating exploration of a mind like no-one else’s. We at Robertson Fine Art, were thrilled to display an extensive collection of Frank’s work during the Edinburgh Fringe Festival – and after it’s huge success we thought we would take this opportunity to delve deeper into the work and life of this remarkable Scottish born artist. 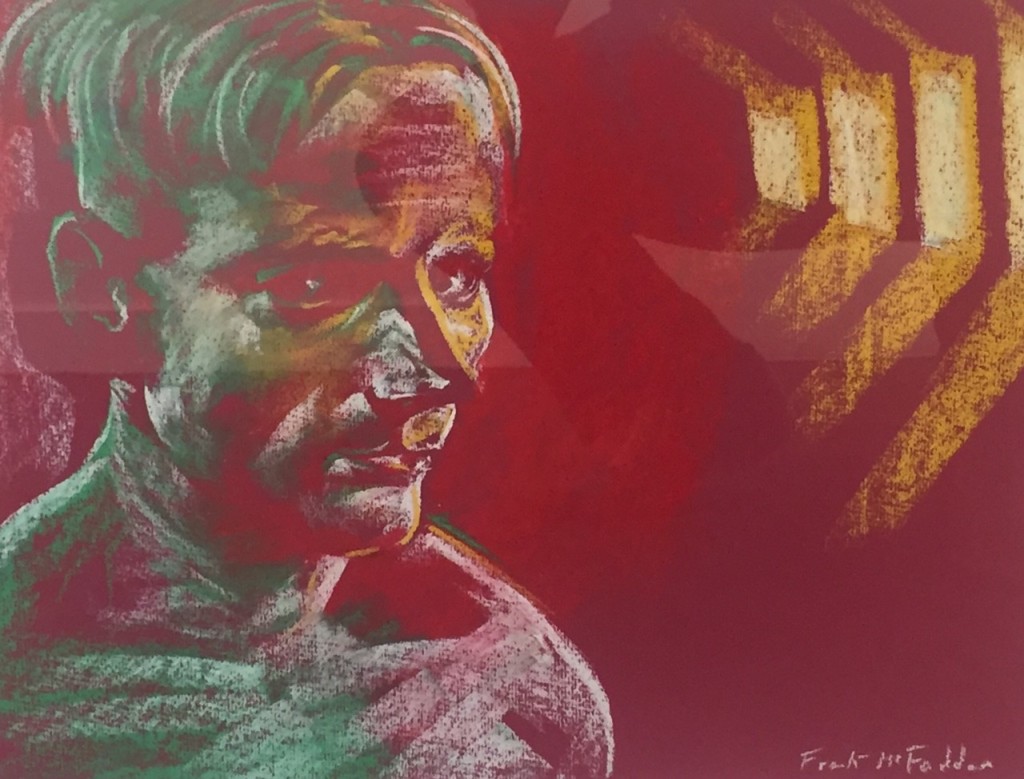 Frank’s life story is just as intriguing as his work. It all began at  Trossachs Street, Maryhill where he lived with his mother, a care worker, his father, an electrician and his brothers Gerry and Michael. When he was 12, the family moved to the tenement flat where his parents still live with McFadden and his sister, Joanne, now aged 15.  Frank enjoyed school and had a bright future ahead of him as a promising graphic designer, but this soon came crashing down and his family watched him spiral out of control as he turned to a life of drug addiction. He got married and even had a daughter, but soon heroin had taken full control and he ended up on the streets selling the Big Issue. He had lost himself and everything he aspired to be – then one day, in a cafe on Great Western Road, Frank spotted one of Glasgow’s most successful contemporary artists, Mr Peter Howson. He said “I knew his work because I used to stare at a poster he’d done advertising the Don Giovanni opera, with all these intertwining bodies, and I thought it was blindingly good, But how I knew who he was, I really don’t know. I was nervous, but I made myself talk to him. I’d seen him in the cafe the day before and I’d missed my chance. I wasn’t going to do it again.’’

Peter reviewed a collection of Frank’s work that he had gathered together and told him it was some of the best work he had seen in years. From there, not only an artistic connection was born between the two, but a friendship. Frank explained “Peter helped me to believe that I had a future” and slowly he began to turn his life around for himself and his daughter. During the ten years that McFadden was addicted to heroin, he considers himself to have been dead and describes how he has spent the past few years coming back to life with the help of his art.

It is obvious to see that Frank’s work is heavily influenced by his chaotic and puzzling life as an addict. In many of his images you will see faces and bodies weaving together, so much so that it becomes unclear where one ends and the other begins – most likely representing all the fleeting memories of people who came in and out of his life during the time of his addiction. There are even more peculiar works of humorous male faces combined with voluptuous nude female bodies, which make you feel like you are experiencing some sort of wacky dream. It is hard to deny that Frank’s drawings and paintings are absolutely captivating. They draw you in and leave you asking ‘just what was going through his head when he created this?’ 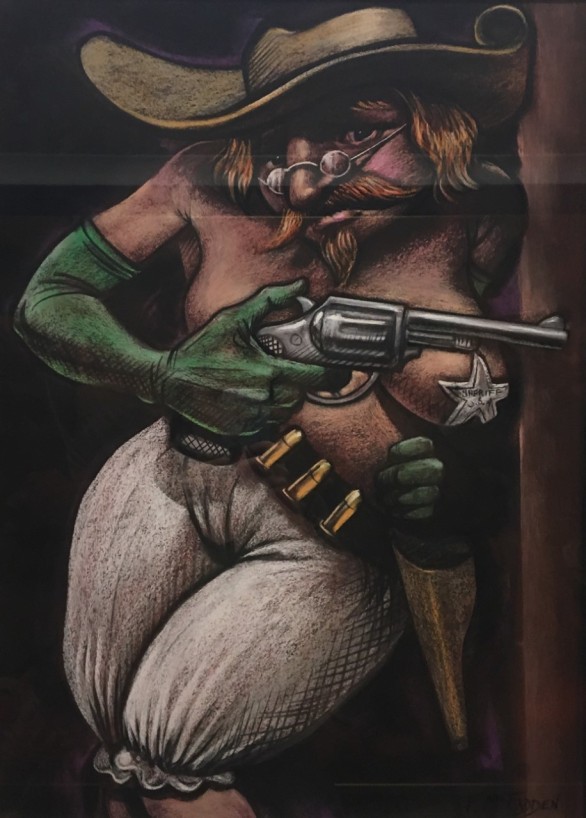 The most popular of his work from the show had to be his vibrant pastel depictions of stony looking faces emerging from the darkness of the black paper behind – they are simplistic works but that right there is the beauty of them. Frank’s capability to create so much expression and emotion through a few scattered motions of pastel is something which should be truly applauded. 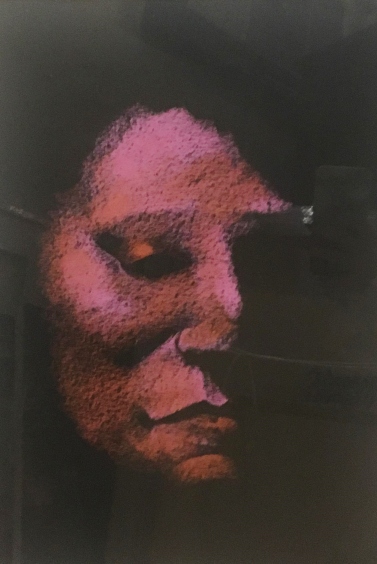 There are so many similarities within the work of Frank McFadden and Peter Howsons – the same gruesome intensity, and the same obsession with faces, figures and religious imagery – so it made complete sense to show their work together here in Edinburgh and we are delighted to say that it was a complete triumph.

You can see more of Frank McFadden’s work here. and please get in touch with us if you would like to secure one of Frank’s fascinating works for yourself.